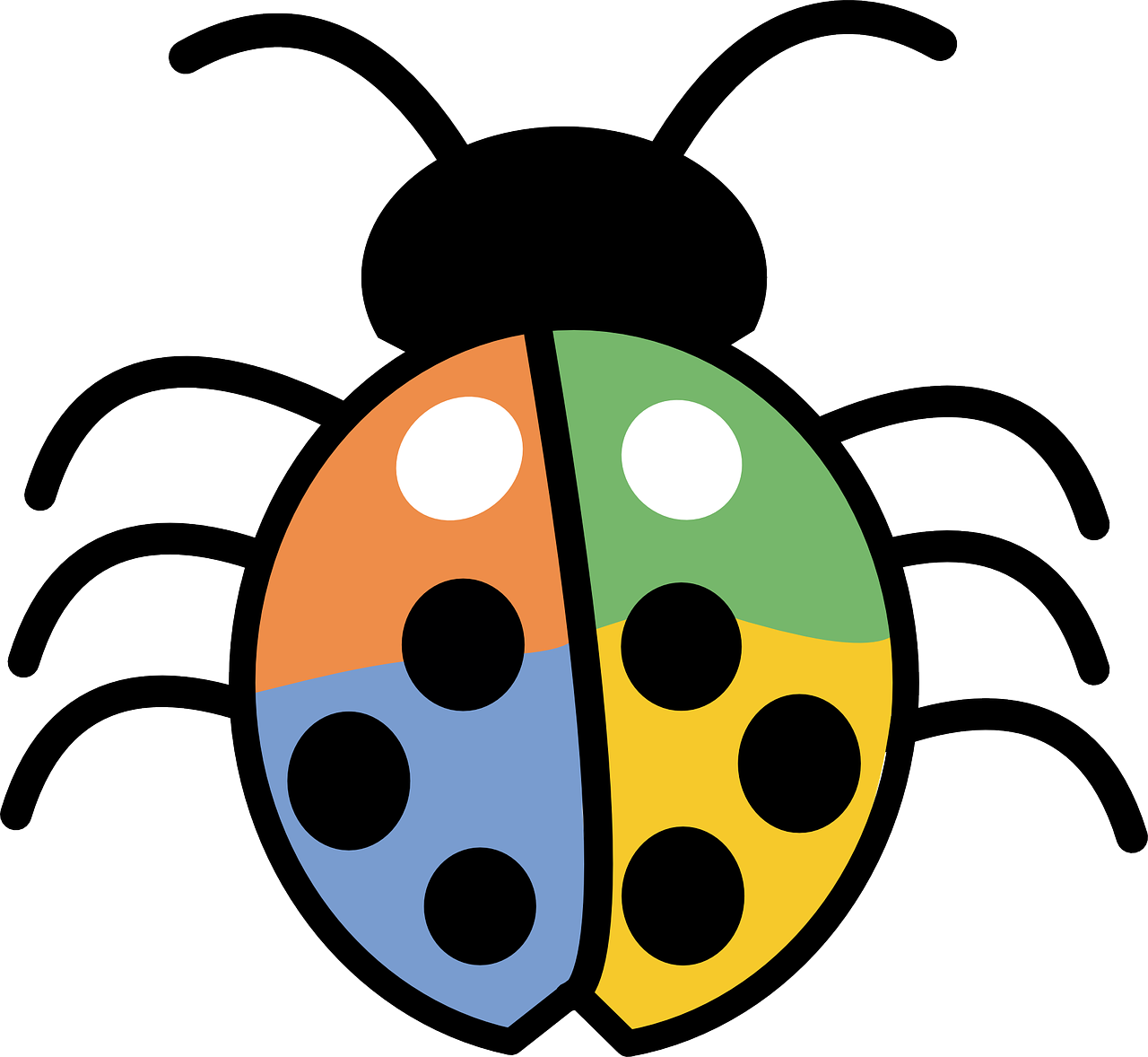 When debugging a production website, Application Insights sometimes is not enough, and you need more powerful tools.

Going through a memory dump is both a blessing and a curse. To be fairly honest, it is mostly a curse. Today one of our services experienced multiple “OutOfMemoryExceptions”. Instead of doing what we mostly do, restarting the hell out of that server, we were a bit smarter and asked Azure to give us a memory dump. The memory dump led us to a specific web request causing a quasi-memory-leak by putting lots of objects (530 038 to be exact) in memory. What follows is how we did it.

Step one: Getting the memory dump

Our service runs on multiple instances, and we needed the memory dump for that specific instance. You can find the right instance easily by going to the live metrics stream of the connected Application Insights. 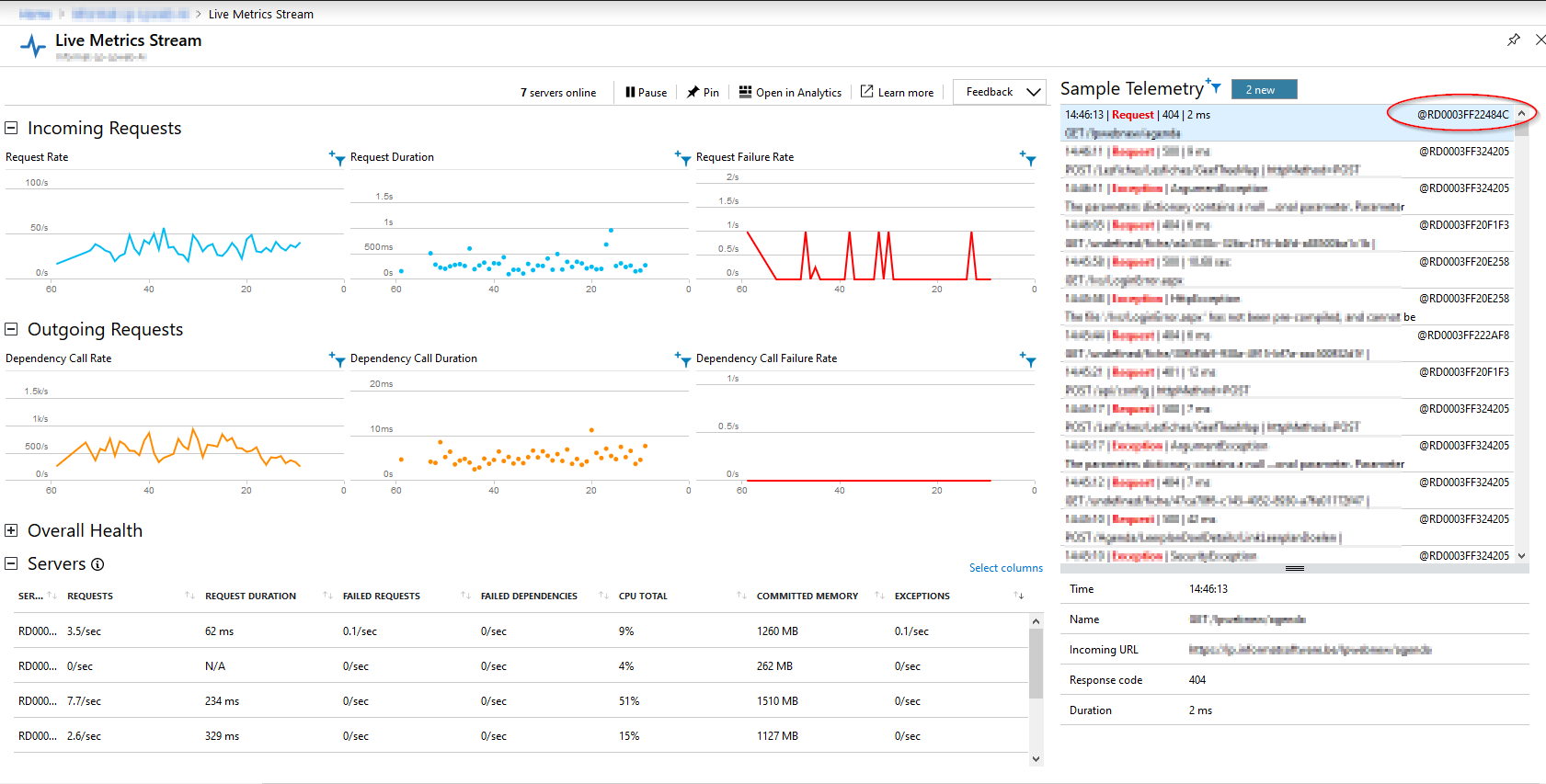 In case of this screenshot, the instance name is RD0003FF22484C, but that will be different for your case. There are other ways of detecting what instance is the naughty one. For example, you can use the application insights search option, or any other way to find the instance name.

You should request the memory dump while the mischief is happening. A memory dump is a snapshot of threads and memory of the running web app and does not contain historical data. Getting a memory dump when the error is no longer happening is pointless.

To request the memory dump, you need to open the web app diagnostic tools. To do this, you open your Web App page in Azure, click “Diagnose and solve problems”, and click “Diagnostic Tools.” 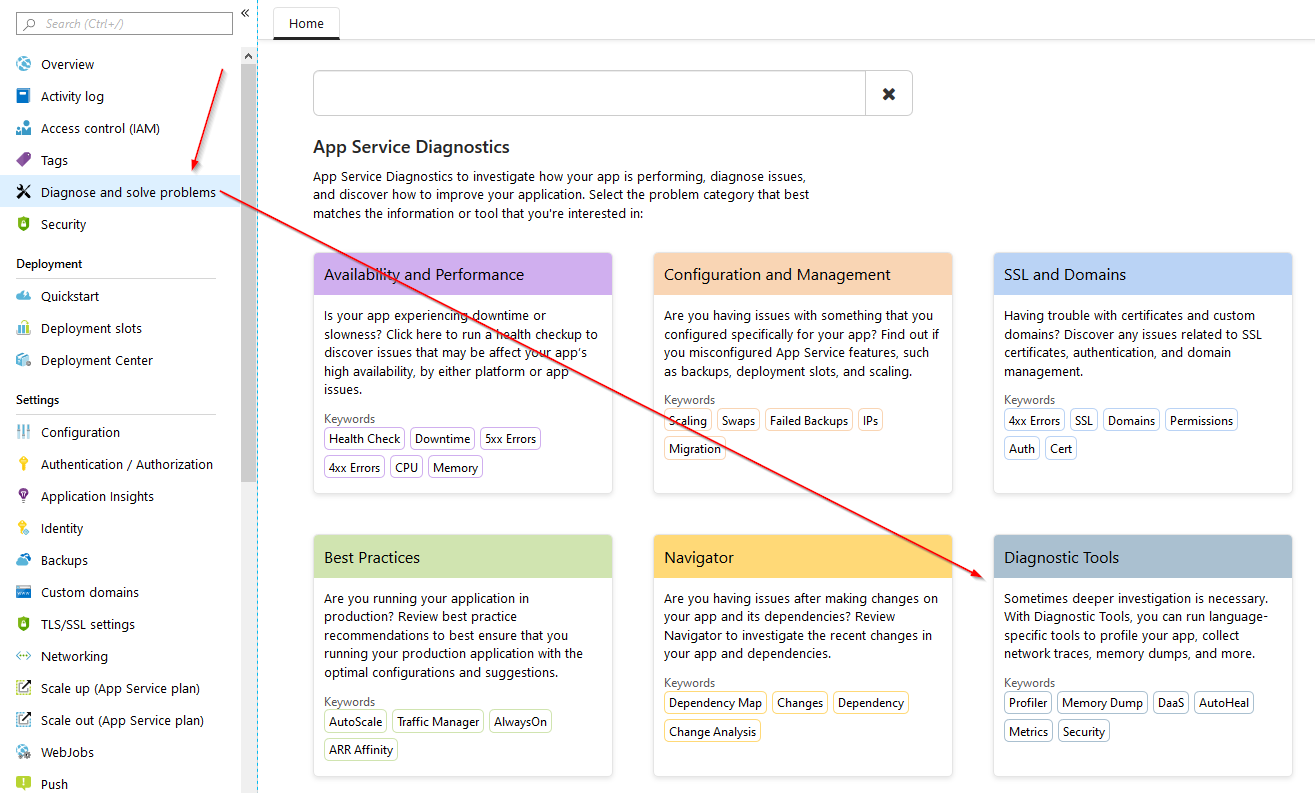 The App Service Diagnostics Tools and Resources house a few handy resources. The ones I use most are the “Collect Memory Dump”, “Collect .NET Profiler Trace” and “Advanced Application Restart”. All of these tools prove to be very handy from time to time, and one should keep them in mind at all times when your application is doing the dirty thing. 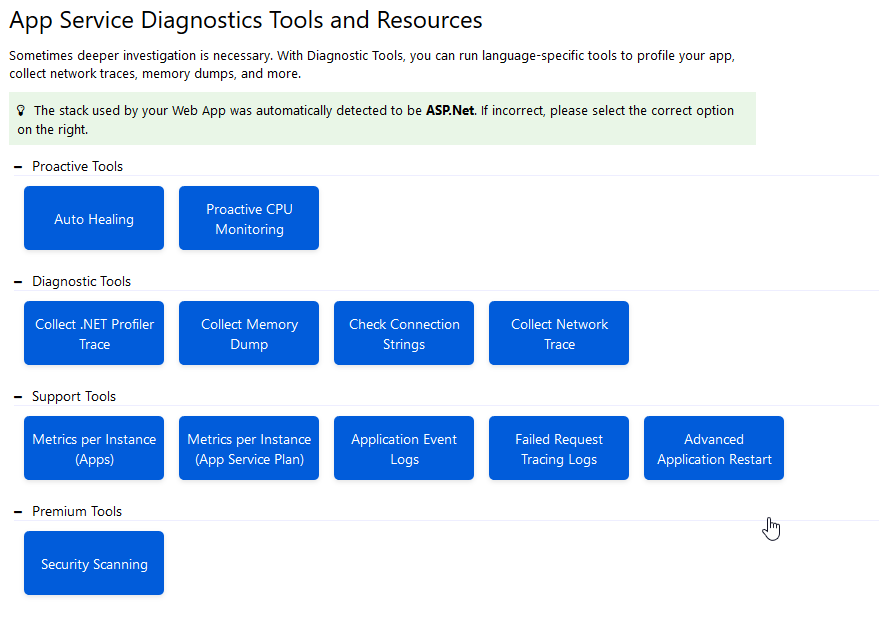 As you can guess, the tool we are going to use is going to be the “Collect Memory Dump” one. After we successfully created a memory dump, we can restart only the one specific bogus instance using “Advanced Application Restart”. Doing so limits the impact of the restart. 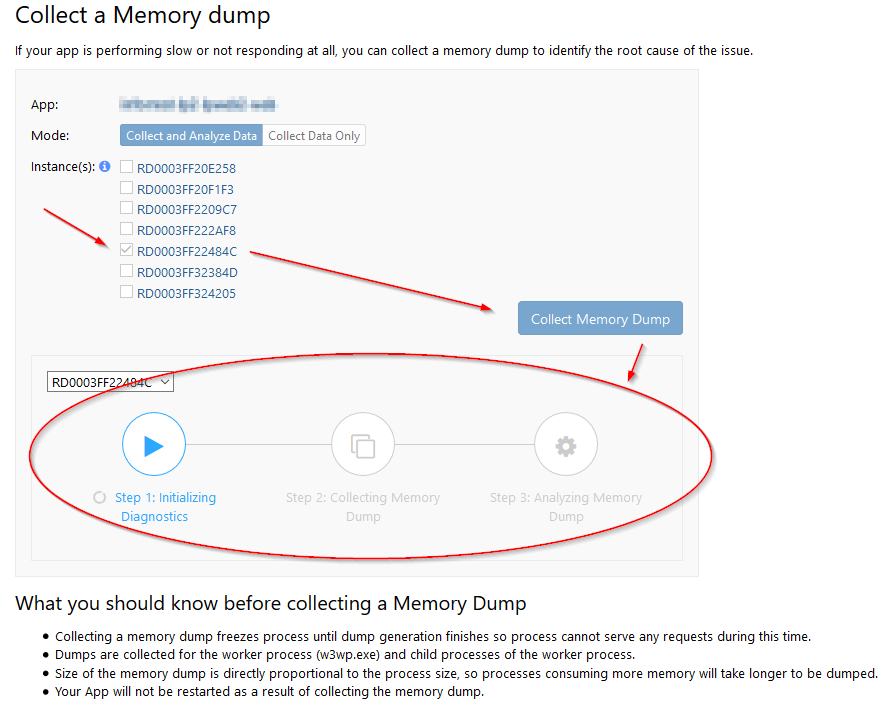 Starting the memory dump is as easy as selecting the instance you want the dump for, clicking “Collect Memory Dump” and wait until all three steps are done. In mode, you can opt to skip the “Analyze Data” step; I tend not to do it because all inputs of data analysis are helpful.

Creation of a memory dump can take a while, depending on how much memory your application is munching. In my case, the dump was about 3GB big and took quite a while to create.

You can open the “Azure analysis” on the right of the screen. The dumps themselves show on the right. For our next steps, we are going to need the dump on our hard drive, so download away.

For my analysis today, I made use of two tools. The first tool was JetBrains dotMemory, and the other one is WinDbg. Lastly, I’ve downloaded two extensions: one called SOSex and another called MEX

My experience with these tools is that dotMemory is a friendly general analysis tool to pinpoint problems generally. With WinDbg, you can dig deep into the data, but it is hard to have a general overview of what is happening.

Below is a screenshot of both dotMemory and WinDbg and the difference in the user interface is very clear. 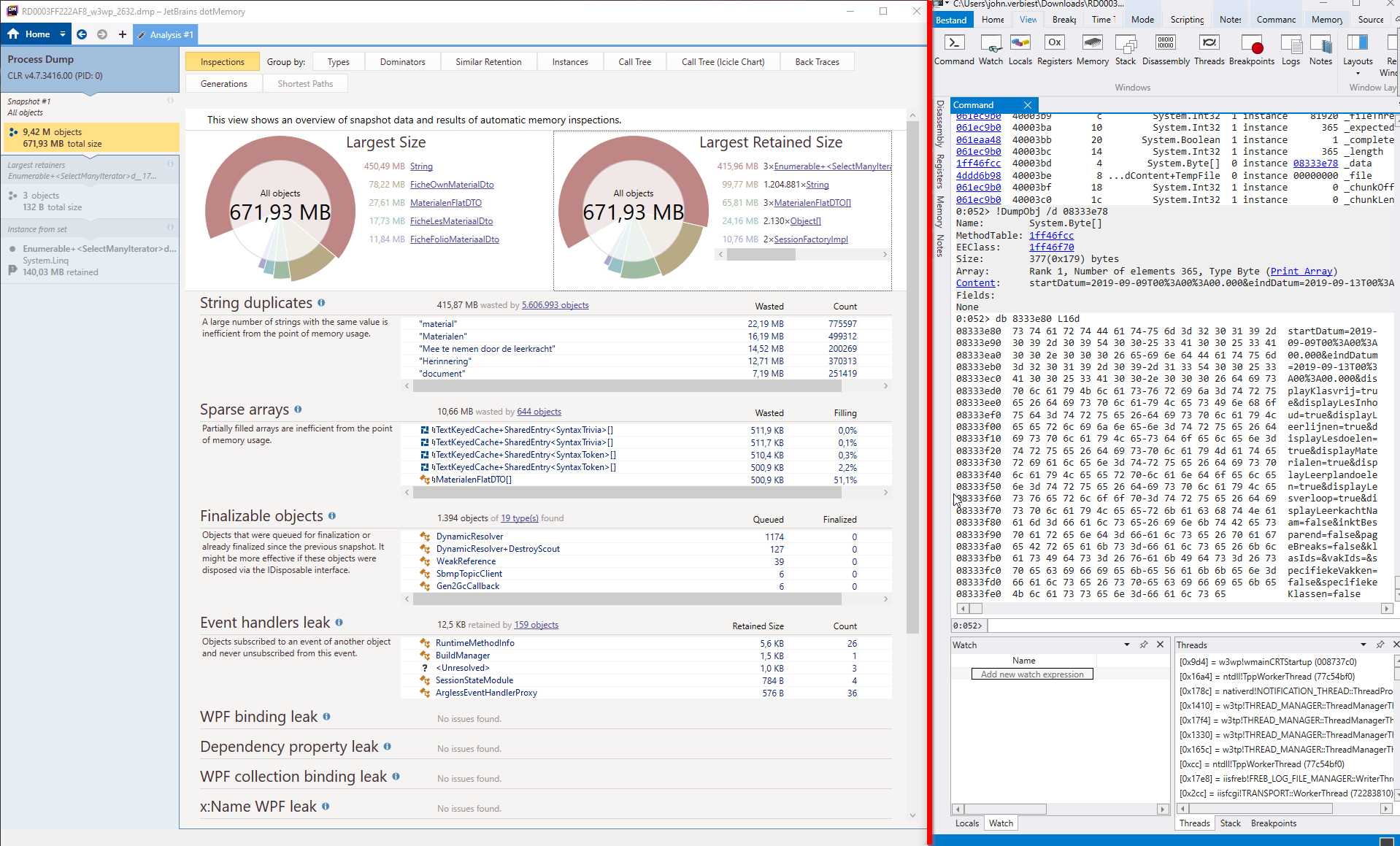 To be specific: dotMemory is on the left of the red line, WinDbg on the right. 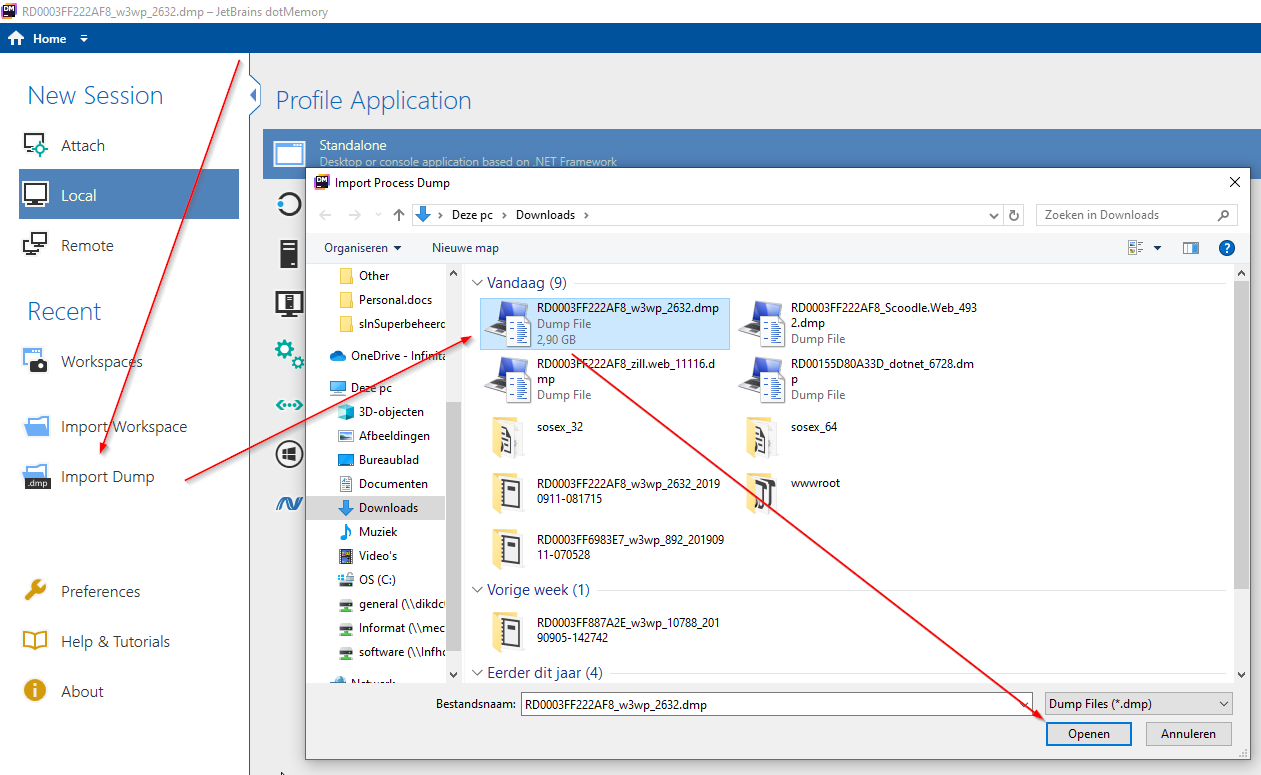 It will show some screens and do some initial analytics. After you went through them you should see something like this: 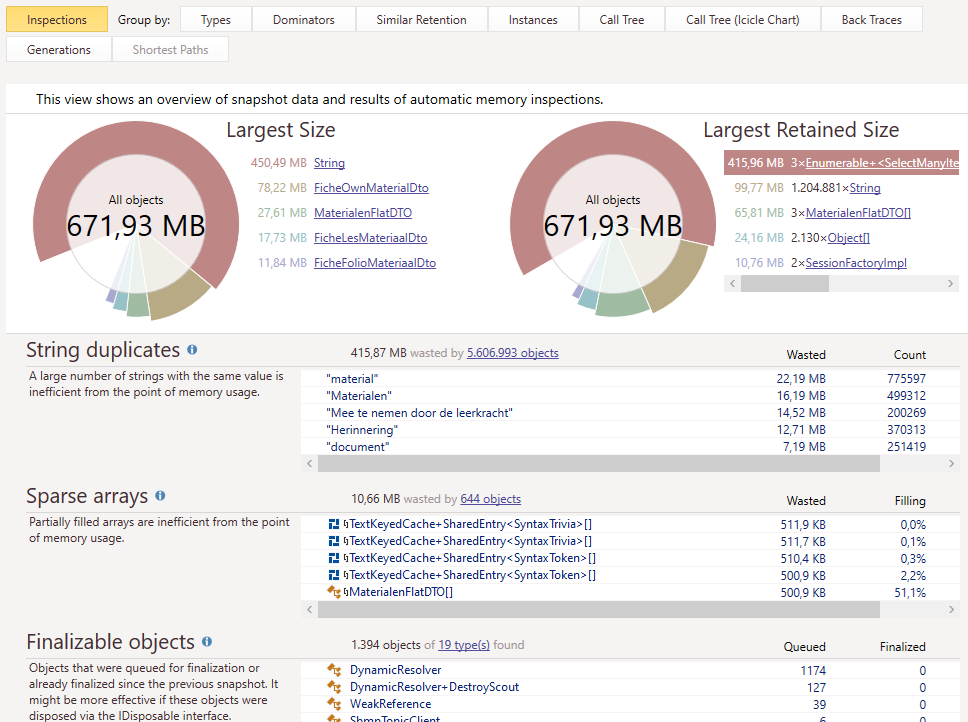 It was quite obvious there was a problem. There is 450.49 MB worth of string data in memory. Another problem that pops up is that three objects in memory hold about 415.96MB of data. That can’t be a coincidence. 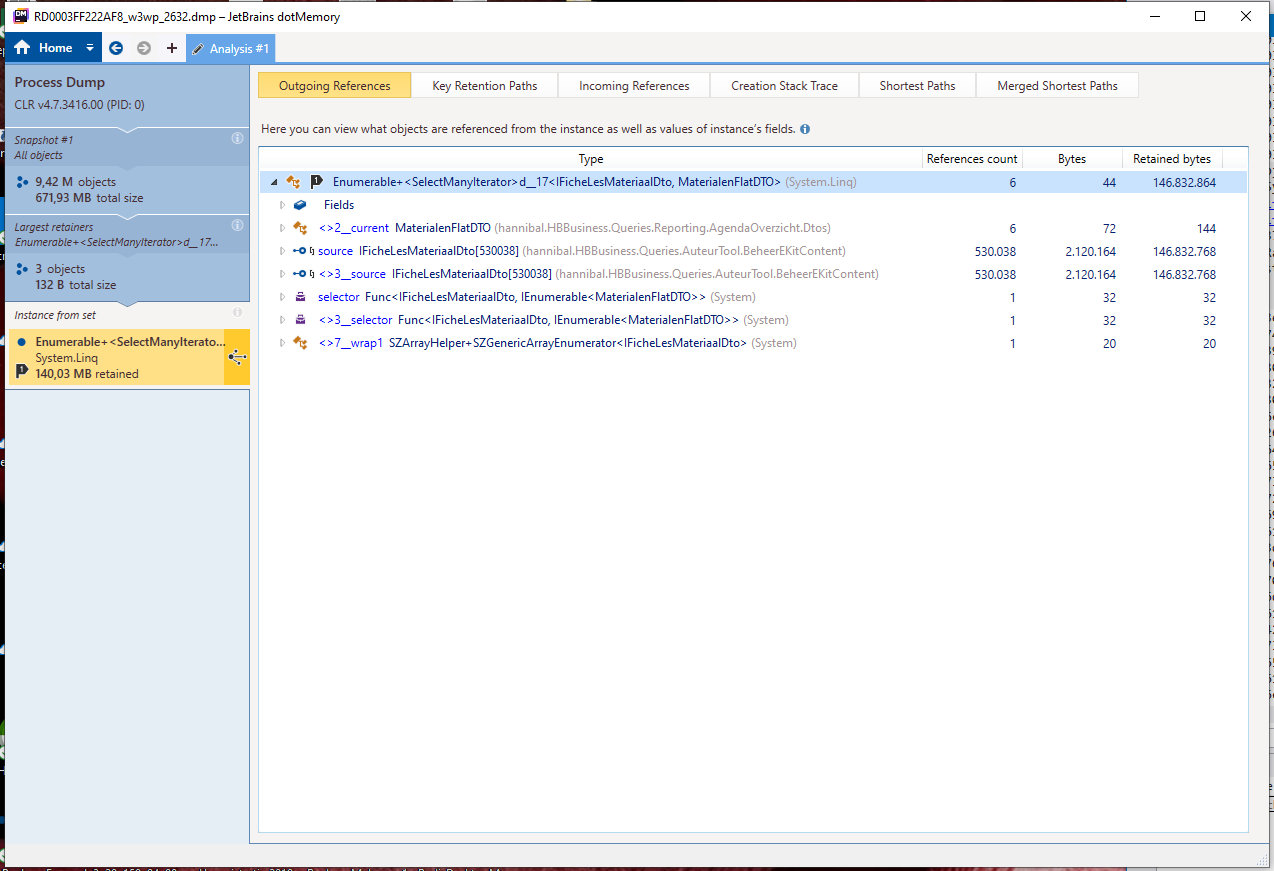 By clicking the “3xEnumerable…”, followed by opening one of those three, I got the data above. In the list there are 530 038 items, accounting to more than 146Mb of data for a single API call. Adding the knowledge that at the time this memory dump was taken, there were three of those lists; there could be only one conclusion. This list must be the cause of the problem.

Sadly dotMemory did not allow me to pinpoint what call caused this situation, so a deeper dive had to be taken, straight into the deep waters of WinDbg.

Step 4: The deep waters of WinDbg

Before we can start debugging, we need the SOS tools. There is a SOS.dll on your machine, but sadly it’s the wrong one. We need the one from the Azure Web App.

The dll can be downloaded very easily (ahem). Here is how:

See, that was not hard at all, very user-friendly. Thanks Microsoft!

First of all, it is time to start WinDbg. When you have this open (and you use the GUI version of it), start with opening the memory dump by dragging the file into the WinDbg screen.

If opened, your screen will look a bit like above. You type commands in the command bar, and you see the results above that. And now the fun begins! .load C:\Users\john.verbiest\Downloads\SOS(1).dll type this command to load the SOS tools from Azure (replace the path with the correct one, and yes, it starts with a dot). If all is good, you will see no response at all. .load C:\Users\john.verbiest\Downloads\sosex_32\sosex.dll type this command to load the extensions. Replace the path, and if you did it all correctly, you get no response.

Look at that heap!

If you want to debug something that went wrong with the heap, it might be a good idea to get a summary of how the heap looks. If you execute !dumpheap -stat you will get an ordered list of all the types that are in memory. The list is ordered by size ascending, so the more memory a specific type uses, the lower it will show. In our case, the end of the list looked like this:

Again we see in this view that there are way too many strings in the system. But furthermore, the next few types are viral as well, counting more than one million of type “FicheOwnMaterialDto”. (The first column of that list is the Method Table, where the methods on that type are stored - we don’t need this at the moment, but you can use it to see compiled code). If you click on the link that method table represents you will get a list of the instances of that specific type. As it was 1.2 million instances, it took me quite some time to get the list.

Clicking a random instance (the first column) made WinDbg execute !DumpObj /d d260197c. This command shows the object located at address d260197c. It gave me this:

Handy as this data could be, I actually needed the parent of this object. To get this I used !gcroot d260197c. This will look for the root object of this one. Result:

This gave me something I really needed: the thread id. Lets put WinDbg into that thread: ~~[1b84]s. Now that we are in the correct thread, we can do more with the CLR. How about getting the current stack? !clrstack gives the following:

this is a hell of a lot of data you should not read, but it shows you have the full stack trace of this thread and something to start working with. More useful (and with more data) is the following command: !clrstack -l -p. This will give you the same stack, but with all locals (-l) and all properties (-p) included. I will only show the most interesting one below:

This is the controller of the api and is a good starting point to know more. Right now I’m looking for the URI that was used to get here.

Clicking on the address next to the “this” parameter, we open the object and can start exploring the memory space.

To give myself a reference on how to proceed: opening the UrlHelper instance got me to this magic:

And from here on you shall explore on your own. I managed to find the url and the parameters, and reproduce the issue this way.

Everything above was before I’ve discovered MEX. With MEX it was much easier to get the data I’ve wanted. Mex adds a lot of missing functionality to debug .net code. Loading can be done by doing .load C:\windbg\x86\mex.dll or wherever you have installed mex into. A quick overview of its features:

This awesome call gives you insights of all ASPX requests the server was doing at the time of the memory dump.

I omitted some requests (this page is getting pretty long already), but you get the picture. Clicking through the addresses gives you nice overviews of the objects using !mex.DisplayObj

This will list all the active tasks, and their status. Applying -t will only show the tasks for the current thread and -v will also list finished tasks.

With this command you are able to see the content of the session. However if you run session with Redis (as we do) you only get the session id and will get to be creative to get the rest.

Is an extended version of !dumpobject, with better deserialization and awesome views of objects.

You can get a list of all the commands via !mex.help

Mex has support for reading InProc session data built-in. However it is not uncommon to put session data in a Redis Cache to support multiple machines. To read the sessiondata you will have to navigate a bit. Be sure to open your objects with !Mex.DisplayObj

Now what was the problem anyway?

We reasonably quickly found what we were looking for. There were 1 974 306 items of 4 specific types in memory, taking up 135MB. Because of this, the number of strings was going through the roof: 5 831 585 string taking up 505Mb of the stack. Knowing this process runs in a 32-bit environment, the stack only had 85Mb of free memory.

By doing a gcroot on one of the instances of one of the four types, I was able to find the thread these objects originated from. The stack trace of this thread allowed me to open the HttpContext. From there, we needed to identify the call that led to this HttpContext. This can be found in the HttpRequest object in this HttpContext, together with the form data. For the session data, I’ve used the steps for Redis above.

After we identified the call, the session variables and the request body, we were able to reproduce the issue. For some reason, we noticed an intensive memory increase when we did the call. After some debugging, we found out there were some edge cases when a SQL query omitted a where clause. With no where clause the complete table got loaded into memory (and it was a massive table). Fixing this issue had a substantial positive impact on performance.

When your application gets to a state where it does no longer behave as expected, a memory dump can get useful. It is only helpful if you can make the dump during the error state of the application. When you are investigating high CPU usage, I would suggest other techniques such as a Trace Log.

I made this list of tools and techniques primarily for myself, so I can use it whenever an application goes bonkers on me. I will extend this blog post as I learn more about this topic.

Turning ideas into working software since 2006.